The Network Touring Exchange (NTE) is a pilot opportunity for our national Field Network Sites to build their capacity by working with other Field Network Sites.  Represented by one dance/movement-based artist/Fieldwork Facilitator, a Fieldwork Site may travel to another Fieldwork site for 2-7 days to learn, share, collaborate and grow.

The Field is excited to announce the recipients of our first Network Touring Exchange!

Amy is a multidisciplinary artist based in Salt Lake City.  Her artistic versatility is informed by her experience as a crossover athlete.  A high-level figure skater and gymnast at a young age, Amy later represented her country in World Cup competition as an aerialist on the US Freestyle Ski Team.  She holds her BFA in modern dance and also studied animation and arts technology.  Her short dance films screened at Galapagos Art Space, American Dance Festival, KMUTT School of Architecture and Design, and Macau Art Museum.  The year 2006 marked a career turning point when Performance Space 122 commissioned Waves of Mu—a complex installation/performance work about the neurobiology of empathy created with world-renowned scientist V.S. Ramachandran.  Through this rewarding venture into science, Amy grew as a social practice artist, expanded the interdisciplinary nature of her work, and received a Visiting Artist Grant from Duke University.  In 2012 Amy premiered Holotype, a large-scale biomorphic installation for The Leonardo Museum.  Inspired by her rigorous study of algae and the challenge to translate the obscure organism’s inscape, this ambitious multi-year project filled the museum’s vast 4,000-sq./ft. atrium.  Andrew Andrew, Culturebot, and Interior Design Magazine have covered Amy’s work. www.amycaron.com 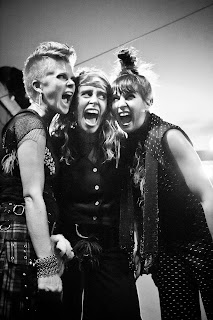 Ilana Silverstein will be touring with her feminist punk rock dance band, Tia Nina, from Washington DC to New York City on April 9-12.

Chrissy is a dance artist, physical therapist, and movement educator.  She is adjunct faculty at Metropolitan State University of Denver where she teaches Experiential Anatomy, Somatics & Injury Prevention, as well as Pilates and various dance techniques.  Also adjunct faculty at CU-Boulder, Nelson teaches Improvisation, and serves as the Co-Director of the Theater & Dance Wellness Program.  In addition to her teaching, Chrissy also directs The Field | Boulder, collaborates frequently with sound and visual artists, has performed original works in PA, NY and CO, and co-produces FRASS events (Front Range Artist Salon Series).  Chrissy's performance research involves the vulnerability found in improvisation, both in movement and in the spoken word.  Most recently, Nelson was invited as an intensive teacher at CI Iowa 2015, and was part of the teaching faculty at the Texas Dance Improvisation Festival 2015.  As a soon to be certified Movement Fundamentals Practitioner, Nelson values CI as a foundation to the dance artist’s practice, and incorporates its principles into all of her movement-based teaching.  Chrissy received her MFA in dance from the University of Colorado-Boulder (2013), with a secondary emphasis in both Somatics and Improvisation in Performance.  She received her MPT from Ohio University in 1998. https://chrissyln.wordpress.com/

Read about their 2016 National Touring Exchange in Part 2 of this series.